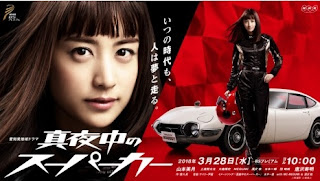 Yamamoto Mizuki will be starring in the new NHK Nagoya drama SP "Mayonaka no Super Car" (The Super Car of Midnight) which will be shown at 10pm on 28 March 2018. The drama is set at an automobile museum housing the famous cars in history located at Nagakute City in Aichi Prefecture and describes how a group of people devote their lives to developing cars.


Yamamoto plays the role of Shirayuki who is a female car designer and aspires to create a car like the Nagoya 2000GT which she feels is the best car ever created in Japan. One day, she is assigned to join the automatic driving development team which leaves her in shock and things start to change when she visits the Nagoya Automobile Museum. She meets a 4th generation Brazilian-Japanese Ricardo (Katono Taiko) who wants to steal the 2000GT from the museum. Just then, a mysterious man (Karasawa Toshiaki) wearing a white racing suit appears in front of them and turns the entire museum into a fantasy space with his magic that also traps Shirayuki and Ricardo in the museum.

Yamamoto commented that this is the first time she is playing the lead in a TV drama which is full of fantasical elements like an anime. She expressed her excitement at knowing about her favourite scriptwriter Aikawa Sho who was responsible for the anime of her favourite "Hagane no Renkin Jutsushi" writing the script for this drama and will work hard to learn all the difficult jargon about cars. In the drama, she will be wearing an order-made racing suit which she described as very fitting for her and said that her first impression of seeing the 2000GT was that it was rounder, cuter and more retro-looking than she thought.

As for Karasawa, he is a lover and owner of the 2000GT in real life and revealed that he was dying to act in this drama once he knew that it was about his favourite car. As the car is a significant car of Japan's cultural history, he hopes that the next generation would still treasure this car.

Filming will begin in the middle of January next year.