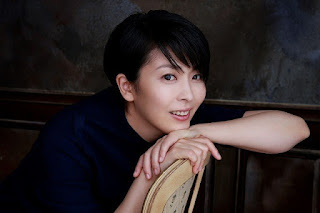 Matsu Takako will be singing the theme song for new movie "Uso wo aisuru onna" starring Nagasawa Masami and Takahashi Issei which will be shown in cinemas from 20 January 2018. The song titled "Tsunagumono" is Matsu's first theme song for a movie and the melody was written by Matsu a few years ago but not given a title then. It was only until the decision to make this melody into the theme song before it got its title so Matsu expressed her gratitude for the opportunity.


Nagasawa plays Kawahara Yukari, a career woman working at a major beverage manufacturer who has been living with her medical intern boyfriend Koide Kippei (Takahashi) for the past 5 years and has plans to marry him soon. One day, Kippei collapses due to a subarachnoid hemorrhage and slips into a coma. To Yukari's surprise, when the police comes knocking on her door, she finds out that everything she has known about Kippei is a pack of lies as his name, occupation, driving licence and family register are all fake. While trying to find out what kind of man she has loved, she heads to his supposed hometown on an island in the Setouchi Inland sea where she gets help from a private detective Kaibara Takumi played by Yoshida Kotaro to investigate the truth.