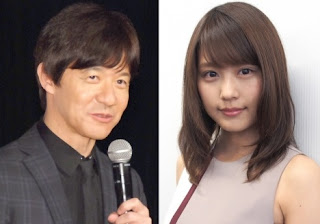 Ninomiya Kazunari, Arimura Kasumi and Uchimura Teruyoshi will be the hosts for the "68th NHK Kouhaku Utagassen" due to be shown on New Year's Eve from 7.15pm to 11.45pm. This is the first time that Ninomiya will be the white team's host on a solo basis although he had done this with his fellow Arashi members five years in a row from 2010 to 2014. Arimura takes on the same post for the red team two years in a row. Last but not least, Uchimura is the main host for the programme which makes it a first for him although he had appeared as a member of music unit Pocket Biscuits in the 49th edition.


Uchimura commented that he was shocked when he heard about the offer to take on such a huge role and that he never expected it coming. Although he anticipates that he will be very nervous, he decided to take this on as this is a rare opportunity for him. He hopes to enjoy the programme with everyone and expressed his thanks especially to the NHK director Mitsuya Kanji who recommended him.

As for Arimura, she also expressed her surprise at being given the opportunity to be the red team's host twice in a year and pledged to work hard even though she has a lot of shortcomings as a host. She also hoped to depend on Uchimura and Ninomiya and end 2017 in an enjoyable way through this programme.

Ninomiya commented that he is very honoured to be able to close the year with the year's representative artists and all the viewers. Along with Uchimura and Arimura, he hoped that they would be able to create a warm atmosphere as if everyone has come home to the NHK hall and look back on the year in a nice way before welcoming 2018 with a smile.

Arimura should just go home. So overused actress. They better cast Nagano Mei instead. And there is a rumour Hiyokko cast will come too, and do special segment like Amachan did. Just. Don't.

Really? After last year disaster? I don't know how good Arimura's acting is since i don't watch her drama/movie, but she was so awkward in last year Kouhaku which is painful to look at. And i also hope that there won't be Hiyokko special segment like back then in Amachan. Arimura just don't have charm that Nounen Rena has

Well, I also didn't like Arimura's hosting last year. Somehow, she strikes me as rather emotionless at times...as in, she doesn't seem to go to the extreme with her expressions and emotions. It was supposed to be a joyous occasion to send off the old year but she seemed so subdued and stiff for some reason. Perhaps she was nervous? However, she should be considered OK in terms of her primary duties as a host i.e. to convey the information to the viewers accurately and generally smoothly but in terms of entertainment value, it was rather lacking.

On the other hand, Ayase Haruka was fumbling her way through when she was the host but somehow, it felt natural and I have to admit, it was amusing to watch as everyone helped her to make up for her mistakes. Although she messed up her words at times or was quite blur on stage, I thought she was more interesting to watch compared to Arimura.

Since Hiyokko did pretty well in terms of ratings, I guess it would be natural for NHK to seize the opportunity to get the cast back and do a reunion special with Arimura. Whether they will do something as long as what Amachan did still remains to be seen until the program lineup and song listing are announced.

As for Nagano Mei, she will probably get her chance next year, assuming that Hanbun, Aoi does well enough, even better than Warotenka.