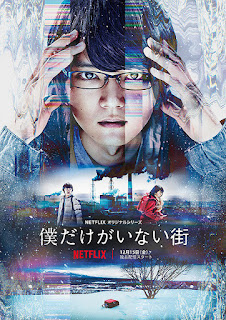 Furukawa Yuuki will be starring in the new Netflix drama series "Boku dake ga inai machi" which is due to be available for streaming from 15 December. The drama which is based on the same-titled manga serialised in "Young Ace" by Sanbe Kei since 2012, had sold more than 4.29 million copies to date and an anime version and real-life movie were made in 2016. This latest drama is the first adaptation work made after the manga had concluded its run in December 2016.


Furukawa plays the lead character Fujinuma Satoru who experiences a "revival" to the past repeatedly by himself whenever something bad happens and the cycle would keep repeating itself until he gets rid of the reason behind it. In order to find the murderer of his mother and solve the mystery of a serial murder case involving primary school children which he believes is related to his mother's case, Satoru goes through repeated revivals back to when he was in Primary 5 and staying in Tomakomai, Hokkaido, 18 years ago. Co-stars include Yuuki Mio, Eguchi Noriko, Mashima Hidekazu, Totsugi Shigeyuki, Yano Masato, Shirasu Jin and Kurotani Tomoka.

She is chosen as the 100th Asadora Heroine in "Natsuzora"