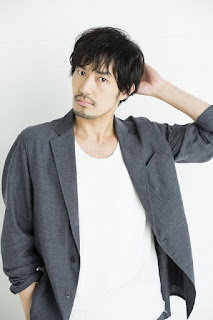 Otani Ryohei will be taking over Koide Keisuke's role in the new movie "Ie ni kaeruto tsuma ga kanarazu shindafuri wo shiteimasu" after the latter was removed from the cast following his scandal of having sex with an underage girl in May this year and having his career suspended indefinitely. The movie starring Eikura Nana and Yasuda Ken as joint leads and playing a married couple was due to be shown in spring 2018 and the filming had been completed. However, following Koide's removal from the cast, the decision was made to re-film some parts of the movie with another actor in winter this year rather than edit Koide's scenes out from the movie as he played a rather significant character. This means that the movie's release will be pushed back to summer 2018.


The movie is based on a question raised by an user of Yahoo! Chiebukuro with the nickname K.Kajunsky in 2010 with regard to his wife's strange behaviour of pretending to be dead whenever he returns home. Yasuda plays a salaryman Jun who is shocked to find Chie, his wife of 3 years, (Eikura) slumped at the hallway of his house with blood flowing out of her mouth. Flustered by this sight, Jun tries to carry Chie out to seek treatment but finds out that what he thought was blood is actually ketchup and she feigned her death. Without an idea as to why she is doing this, Jun finds out that Chie keeps repeating this antic by trying different ways of "dying" such as being eaten by a crocodile, shot by a gun or having an arrow pierced through her head. Initially, Jun feels that Chie is being silly but gradually starts to worry that something is very wrong with her. Koide's role was Jun's junior at work named Sano who is also a salaryman.

The movie's producer Miyamae Yasushi said that the decision to get Otani to take over the role was made after serious consideration with various parties. The cast and staff would like the movie to be released after all and the company had also received a lot of feedback from the public through social media that they would like to watch this movie. As such, Miyamae thanked everyone for their support and encouragement and that they will work hard to make sure that the movie is ready to be released by early summer next year.

Otani commented that he is in the midst of preparations for the upcoming filming with his co-stars and had engaged in many discussions with the director on how to play his character. As such, he hopes that everyone will look forward to the movie and support it when it is released in cinemas.