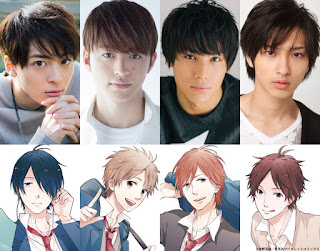 Sano Reo, Nakagawa Taishi, Takasugi Mahiro and Yokohama Ryuusei will be starring in the new movie "Nijiiro Days" which will be shown in cinemas during summer 2018. The movie which is based on the same-titled manga by Mizuno Minami and had an anime version in 2016, will be directed by Iizuka Ken and written by Nezu Rika. Filming will be done from mid October to November in Tokyo.

Sano expressed his worry about whether he would be able to handle the role of Natsuki especially since he is quite new to acting. However, he would put in his best while learning from the director and co-stars so as to show the importance of friendships and the colourful daily lives of the characters through this movie. As for Nakagawa, he revealed that when he read the original manga, he was amused by how the lives of the four boys were depicted in this shoujo manga. As such, he hopes that the movie will show the elements of friendship, love and conflict which everyone would have gone through during their days as students and remind them of those days which were full of laughter and tears.

Takasugi commented that he had always liked this manga and could identify with his character Tsuyopon so he is extremely honoured yet worried about acting in this movie. He hoped that everyone would like their movie and go through the world of youth with them. Last but not least, Yokohama said that it is rare for a shoujo manga to feature male leads and is eager to take up this challenge of acting in a new type of this genre. He is especially happy to be able to play Katakura Keiichi who he likes the most and hopes to show his growth as an actor to the director who he last worked with 4 years ago in a drama.