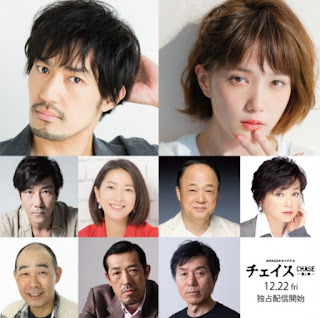 
The story focuses on a series of 5 murder cases involving young girls which happened 27 years ago. Although a suspect was arrested at that time, there were no conclusive DNA results to prove his guilt and there were many unexplainable discrepancies. After so many years, a reporter Mikami (Otani) and a newbie assistant director Mai (Honda) from BS TV come together to conduct their own investigation as to whether the man was indeed the culprit. However, they gradually find out that this is a false charge and there are strong dark forces within the government at work to conceal the truth as they try to expose the hidden truth. Co-stars include Kishitani Goro, Hada Michiko, Tayama Ryosei, Katou Kazuko, Denden, Shimada Kyusaku and Hirata Mitsuru.

Otani said that he was very happy when he got the offer for this drama and viewed this as a meaningful challenge to himself even though it was also very tough. He described his character Mikami as a man who doesn't bow to pressure and since he looks very masculine and has a commanding presence, Otani revealed that he went for some physical training before the filming as preparation. He cited the part about how he and Honda's character come together to overcome the hurdles in solving the case as one of the highlights in this drama.

As for Honda, she revealed that on the first day of the filming, they were shooting scenes in the last episode so they had to visualise how to build up their character since the scenes were not shot in sequence. As such, this must be the No.1 drama where she had to engage in the most discussions with the director and think about her character a lot. Honda felt that this helped her to develop as an actress and said that her character may have been limited in her capacity as a journalist but the drama's story will show how she breaks free of these shackles.