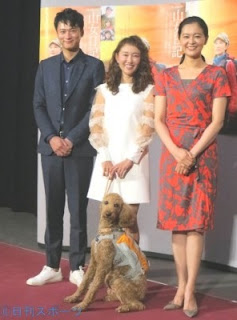 The press conference of new NHK drama SP "Yamaonna Nikki" was held on 19 october which was attended by cast members Kudo Yuki, Kurotani Tomoka and Kikawada Masaya. The drama SP will be shown in two parts at 10pm on 29 October and 5 November and is the sequel to the original drama series shown in November last year.


Kudo plays a woman named Tachibana Yuzuki who is a mountain climbing guide and the story features her interaction with the climbers she leads on these trips up and down the mountains. For this drama SP, filming was done on location at mountains like Mount Jonen in Nagano Prefecture which is close to 2,900 metres high.

During the previous filming for last year's drama series, Kudo had suffered a sprain in her right ankle. This time, she managed to complete the filming without any issues so Kudo expressed her gratitude to the mountain gods for taking care of her and revealed how she exercised a lot of caution during the trip and reminded the cast and co-stars to be mindful of their steps as well. She also expressed her thanks to everyone for displaying such great teamwork and producing this wonderful drama which she was thankful to be a part of.

Kurotani who climbed a mountain for the first time during the filming this time, said that there were days when the wind speed was 25 metres per hour and she had tripped numerous times as well. However, she found the experience to be really gratifying and allowed her to reflect on herself so she hoped to be able to do this again outside of work. Kikawada echoed Kurotani's view about the tough filming due to the unpredictable weather conditions so they had to be prepared all the time in order to begin filming as soon as the weather improved. As such, it was a precious experience for him to be a part of this team.