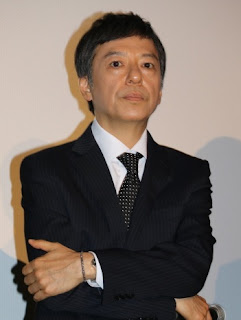 Itao Itsuji is reportedly having an affair with gravure idol Toyoda Serina who is half his age i.e. 27 years old according to an article published in the electronic version of tabloid "FLASH" on 17 November. Itao and Toyoda were caught having a meal together at a restaurant in Shibuya before going to a karaoke and love hotel nearby where they spent a total of three hours together. As they left the love hotel, the reporters tried to interview them but they did not answer any of the questions.


According to other news reports, Itao and Toyoda met and worked together in the movie "Hibana" starring Suda Masaki and Kiritani Kenta which was directed by Itao. The movie is due to be shown in cinemas from 23 November. However, the two of them were said to have limited interaction during the filming as Toyoda had a very small part in the movie so they were believed to have gotten closer during the meal gatherings and wrap-up party. Ironically, during the filming of "Hibana", Itao had warned the cast members not to get into trouble such as beating people, stealing or having affairs at least not until the movie has been released. However, he himself was exposed for having an affair just days before the movie's release.

When asked about this article's authenticity, Itao's agency said that the facts mentioned in it were largely true but did not comment further. At the moment, Itao is participating in a stage play currently being performed in Shibuya so the media are waiting for him to comment on the situation. Meanwhile, Toyoda updated her Twitter account by saying that she had done an irreversible thing and didn't know what to do which was seen as a reference to this scandal.

Coincidentally, Itao is starring in the TV Tokyo Autumn 2017 drama "Fringeman ~ Aijin no tsukurikata oshiemasu ~" where he plays a expert in having affairs, had as many as 11 lovers at one time and teaches three men how to do the same.