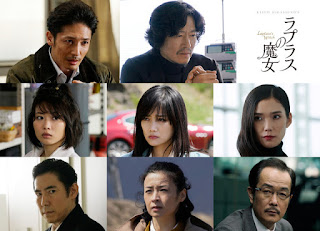 The supporting cast line-up of new movie "Rapurasu no Majo" starring Sakurai Sho had been announced. The movie which is based on the same-titled novel by Higashino Keigo, describes how two cases of people poisoned to death by hydrogen sulfide at hot springs in two separate locations seem unrelated at first but it turns out that the victims were acquaintances. As such, the police approaches Professor Aoe Shusuke (Sakurai) who is also a geochemist to assist in their investigations to confirm if the deaths were accidents or foul play. During the process, Aoe meets a mysterious girl Uhara Madoka (Hirose Suzu) who appears at the crime scene and seems to have the power to predict when a natural phenomenon will happen. While Aoe is trying to ascertain if Madoka is involved in the cases, Madoka is also searching for a missing young man Amakasu Kento played by Fukushi Souta.


Toyokawa Etsushi will be playing Amakasu's father Amakasu Saisei who is a former movie director while Lily Franky plays Madoka's father Uhara Zentaro who is a neurosurgeon. Tamaki Hiroshi plays Nakaoka Yuji, a police detective from Azabu Kita Police Station who is investigating the case and Shida Mirai will be playing Aoe's assistant Okunishi Tetsuko. Sato Eriko plays Mizuki Chisato, the wife of the victim who died due to hydrogen sulfide poisoning while TAO and Takashima Masanobu play Madoka's bodyguards Kirimiya Rei and Takeo Toru respectively. Last but not least, Dan Rei will be playing Madoka's last mother Uhara Mina.

"Rapurasu no Majo" will be screened in cinemas during the Golden Week holidays in 2018.

What has Tamaki Hiroshi done to be stuck twice with Fukushi Sota? Sigh. Hope the movie will be good.

Is Suzu horrible? I've only seen her once in Bitter Blood and she was okay.

It's not so much about whether Hirose Suzu is a good actress. It's more about seeing her in yet another production even though there are so many actresses around. I can't help but feel that the over-exposure will not do her a lot of good because it just reeks of hard sell rather than a reflection of her true popularity or ability as an actress. And from my impression formed from reading the original novel, I just can't help but feel that Hirose is a bit off from what I expect so I am not that keen on seeing her in this movie especially since I wouldn't consider myself a fan of her in the first place.

Similarly for people like Suda Masaki, Yamazaki Kento, Gouriki Ayame, Takei Emi or Tsuchiya Tao, they all had periods when you practically saw them everywhere in so many productions that there was talk about the public being so sick of seeing them again and again everywhere. I remember that Gouriki and Takei in particular suffered a lot of bad press for being able to take on leading roles in dramas despite the poor ratings and Yamazaki for practically doing an almost clean sweep of the manga adaptations in the market at one time. In Takei's case, the fact that she's still doing a drama now despite her pregnancy suggests that she's so overworked and her schedule booked to such an extent that she can't seem to take a break even during this important time for her.

It's a fine balancing act to maintain one's popularity and exposure without making the viewers get too sick of seeing the celebrity everywhere. Much as I like people like Takahashi Issei who is hot property these days, I too am worried if he can maintain the momentum in the long run or burn out too quickly due to the continuous string of projects featuring him.

Agree. Suzu's acting is not bad, but too much exposure is just making her like Takei or Gouriki. Just pick one movie/drama that it's very good and can show her real acting. And if she's that good, pick another good movie, and not MOST of the movie showing that year. I used to like her, too bad that now it become like this.
Sorry for the rambling