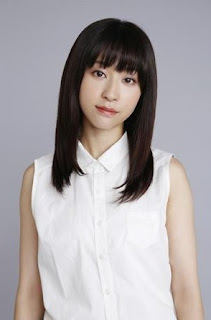 Seto Koji's younger sister Seto Saori who is a former non-no model, will be taking on her first leading role in the new movie "Ai no Yamai" (The sickness of love) which will be shown in cinemas from 6 January 2018. The movie directed by Yoshida Kota is based on the true story of a murder-cum-assault case which took place at Wakayama in 2002 and led to the death of one person and another to be seriously injured. A woman who was living in Wakayama and worked in a company, had collaborated with an unemployed man she met on an online dating site to kill a woman living in Osaka for the sake of money. The corpse was then burnt and dumped in the mountains of Wakayama. It was later found out that the woman had dated the victim's younger brother prior to the crime. Both the woman and man were sentenced to life imprisonment in 2005.


Seto plays the lead character Emiko who poses as the daughter of a yakuza chief and instigates a man who she comes to know from an online matchmaking site to commit robbery and murder. Okayama Amane plays Shinnosuke who is totally devoted to Emiko after getting to know her online and gives up all his money for her. He is then ordered by Emiko to kill a woman which is part of her plan to frame him for the robbery-cum-murder case. Other co-stars include Gekidan EXILE's Yagi Masayasu, Yamada Maho, Sasaki Kokone, Kuroishi Takahiro and Fujita Tomoko.

Seto said that in order to immerse herself into the role, she tried her best to understand why Emiko did what she did and stretched herself to the limit mentally. As the story is based on a true story and Emiko had a very different personality from hers, she wasn't sure at first how to act especially when she just read the script. Although it was tough during the filming, she felt that she had given her best in portraying this character with the help of the director who engaged in many discussions on how to handle this character.

Seto used to be a hairstylist until she became non-no's model in 2011. She made her debut as an actress in 2013. She revealed that her brother was very encouraging and happy for her landing the lead role in this movie but she had to distance herself from her family and friends before the filming started so as to get into the lonely world of Emiko. Seto also made changes to her image by dying her hair red and shaping her eye brows to project a sharp image. She even had to smoke for the first time in her life during the one-month filming.

I can't even imagine taking up smoking just for a role! Well, I can't imagine doing a lot of things actors do for their roles, which is why I just enjoy their performances but don't want their jobs at all.