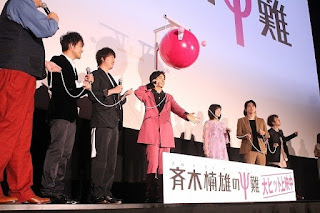 The first-day-screening event of new movie "Saiki Kusuo no Sainan" was held at Marunouchi Picadilly on 21 October which was attended by the director Fukuda Yuichi and cast members Yamazaki Kento, Hashimoto Kanna, Arai Hirofumi, Yoshizawa Ryo, Kasahara Hideyuki, Kaku Kento and Muro Tsuyoshi. The film is based on the same-titled popular manga by Aso Shuichi and features Yamazaki in the role of a senior high school student named Saiki Kusuo who possesses strong supernatural powers that constantly gets him into trouble. With the annual cultural festival coming up soon, Kusuo hopes that he would be able to get through it peacefully but gets embroiled into a huge mess by his strange classmates like Teruhashi Kokomi (Hashimoto) who has a wild imagination.


Yamazaki reflected on the filming and promotional run that it had been so fun so he hoped that everyone who watch this movie will be able to laugh through this happy movie and spread the happiness. The director added on that comedic movies like this hardly become hits in Japan so he hopes that this movie will do well so that he and Muro will continue to see an increase in the jobs they get. Muro then said that he and Sato Jiro are the usual members in Fukuda's movies but seeing that Kaku's scene was included at the end of this movie's CM instead of theirs, that probably meant that Kaku would be one of them in future.

When asked about what scene made them laugh, Fukuda said that there was a part where Yamazaki had to show the expression as if his heart had stopped. This led the MC to suggest that Yamazaki could replicate the same expression on stage for the audience. Although Yamazaki was apprehensive at first, he still went ahead to show the funny expression which made everyone laugh and Fukuda to joke that Yamazaki's agency would probably be mad at him later for doing this.

Hashimoto who had yet to see the completed movie, heard from the people around her that Fukuda told them not to watch this film as they wold be shocked by how comedic and exaggerated Hashimoto could be on screen. Although Hashimoto was worried about how she would look especially in the scenes where there were close-ups into her mouth, Fukuda reassured her that anything which didn't look acceptable were deleted by CG.