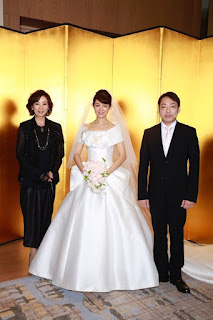 Fujisawa Ema and her husband held their wedding ceremony and banquet at Grand Hyatt Tokyo on 3 November after they registered their marriage on 21 August. Fujisawa who appeared in her EMarie wedding dress by Ema Rie when she met the media, expressed her joy at seeing everyone at her wedding. Fujisawa revealed that she had come to know Ema Rie when she filmed the movie "Kekkon shiyouyo" and it was a happy thing for her to be able to wear a EMarie dress. Fujisawa also wore the furisode prepared by her parents who own a kimono shop in their hometown at Takamatsu after the wedding gown change.


The wedding was attended by about 130 people including Fujisawa's colleagues from the same agency such as Matsushima Nanako and Ito Ayumi as well as Kagawa Teruyuki and Katahira Nagisa who played Fujisawa's parents when they appeared in the NHK morning drama "Tenka". The theme song of "Tenka" i.e. "Namae no nai sora wo miagete" by MISIA was played as the march-in song for the wedding ceremony.