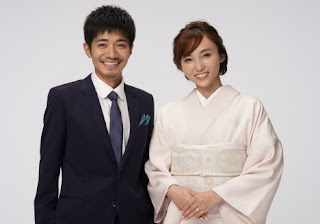 Wada Masato and Yoshiki Risa announced through their agencies that they have registered their marriage on 22 November which is also known as ii-fuufuu-no-hi (Good Couple Day). The two of them have already started living together and Yoshiki is expected to continue working after their marriage.


In his statement, Wada said that since meeting Yoshiki, their days have been filled with smiles and he has come to realise how important she is to me. As such, he pledged to work hard with her to lead a fulfilling life and make a contribution to the world, no matter how small it may be. On the other hand, Yoshiki revealed that they met through common friends and that she had come to think of him as a lifelong partner. She described Wada as a respected senior in work and someone with a warm personality and full of smiles. Although they are still lacking in many ways, she hopes that they will be able to work together to overcome difficulties together and support each other going forward.

Now that he and Endo Yuya can sit around being old married men together, I wonder if he'll finally graduate from D-BOYS. I also wonder if Wada and Yoshiki's little contribution to the world might be in the form of something cute due in a few months. May they have a happy and long marriage.

Well, the announcement didn't say that Yoshiki is pregnant but there is a possibility that there might be some good news in the near future.