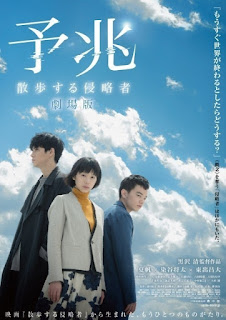 The spin-off drama "Yochou Sanposuru Shinryakusha" starring Kaho, Sometani Shota and Higashide Masahiro will be shown at Shinjuku Picadilly in Tokyo, Nanba Park Cinema in Osaka, Midland Square Cinema in Aichi and Sapporo Cinema Frontier in Hokkaido for two weeks from 11 November. The 5-episode drama series will be combined into a 140-minute movie with Dolby Digital 5.1 audio for the purpose of this cinematic release.


The story describes how Yamagiwa Etsuko (Kaho) brings her colleague Asai Miyuki (Kishii Yukino) to the hospital where her husband Tatsuo (Sometani) works at after Miyuki tells her that there is a ghost in her house. However, when Etsuko pays a visit to Miyuki's place, she finds his father to be the only person with her. Miyuki is then diagnosed with a psychological deficiency in her mental concept of a family. Just then, Etsuko also meets a new surgeon Makabe Shiro (Higashide Masahiro) at the hospital and finds him strange for some reason. When explainable things start happening around Etsuko and Tatsuo is stressed psychologically for some reason, she starts to suspect Makabe for having a part to play in this especially after he tells her that he is here to invade Earth. Co-stars also include Nakamura Eriko, Yasui Junpei, Ishibashi Kei, Yoshioka Mutsuo, Otsuka Hirota, Chiba Tetsuya, Suwa Taro, Watanabe Makiko, Nakamura Makoto and Oosugi Ren.