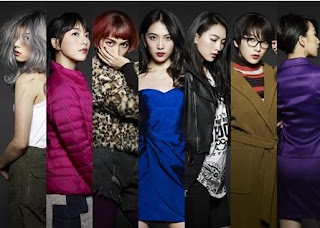 Jiyoung will be starring in the new FujiTV / Tokai TV Autumn 2017 drama "Orphan Black ~ Nanatsu no Idenshi ~" (Orphan Black ~ 7 Genes ~) which will begin its run from 2 December in the Saturdays 11.40pm timeslot. This will be Jiyoung's first leading role in a drama series and is the first remake of the hit BBC suspense drama "Orphan Black" which has 5 installments to date since its launch in 2013. She will be playing 7 characters in this drama which she commented that it will be a huge challenge in her acting career to date especially since she has to speak in Korean, English, standard Japanese and Japanese dialects as well.


The drama features Jiyoung as the lead character Aoyama Sara who is a 27-year-old single mother with a 6-year-old daughter. Her mother-in-law turns up suddenly to snatch away her daughter as Sara is crumbling from the stress and fatigue of working day and night to make ends meet and fails to notice that her daughter is sick. One day, Sara happens to witness a woman named Shiina Maoko (also played by Jiyoung), a police detective who looks exactly like her, jump onto the railway tracks in front of her so as to commit suicide. When Sara comes to know about Maoko's rich background after picking up the latter's bag, she decides to impersonate Maoko so as to lay hands on her fortune and be able to live with her daughter in future. However, Sara starts to come across various women from different backgrounds who look exactly like her for some strange reason and the people around Maoko notice something strange with Sara and start to suspect her.