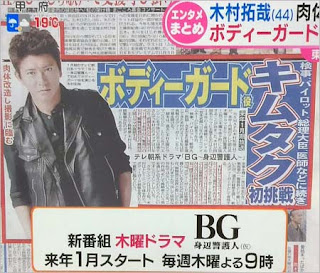 Kimura Takuya will be starring in the new TV Asahi Winter 2018 drama "BG ~ Shinpen Keigonin ~" (BG ~ Personal Guard) which will begin its run from January in the Thursdays 9pm timeslot. He will be playing a private bodyguard for the first time.


The original story written by Inoue Yumiko features Kimura as the lead character Shimazaki Akira who starts work as a bodyguard in a private security company and doesn't hold any guns or weapons in the course of his work. Shimazaki used to be a capable bodyguard but quit and became a security guard at a construction site. While hiding his past, Shimazaki becomes a bodyguard again and goes through his daily work with other newbie bodyguards. As such, he will have to depend on his skills and quick thinking to assess the situation while ensuring the safety of his clients and not going overboard beyond the line of self-defense. In addition, he has to obey the orders of his clients and protect anyone who becomes his client regardless of their identities. At home, he is a single father to a junior high school boy and has communication issues with his son.

Kimura who had been protected by bodyguards before while out in public during official appearances, said that there actually wasn't anything dangerous but having these guys around was a huge relief off their minds. In fact, the best thing for these guys was that nothing had happened so Kimura wondered how the drama would show this reality while keeping viewers entertained since they couldn't possibly let the story progress without anything happening. Since it had been 13 years after Kimura appeared in a drama written by Inoue (the last was 2005's "Engine"), he expressed surprise at how she describes the mentality of men from a women's perspective and is looking forward to seeing how the story will progress.

Filming will begin in early December.