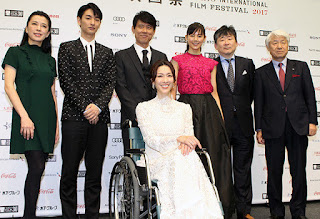 The world premiere of new movie "Midnight Bus" was held during the 30th Tokyo International Film Festival on 2 November which was attended by the director Takeshita Masao and cast members Harada Taizo, Yamamoto Mirai, Konishi Manami, Nanase Kou and violinist-cum-composer Kawai Ikuko who is in charge of the music for this movie. The movie will be shown in cinemas from 27 January 2018.


The movie which is based on the same-titled novel by Ibuki Yuki, describes the story of Takamiya Toshikazu (Harada) who quit his job in Tokyo and goes back to his hometown in Niigata to be a midnight bus driver. One night, he happens to bump into his ex-wife Kaga Miyuki (Yamamoto) who he had parted ways with 16 years ago when she boards his bus. This marks the start of a journey to restore family ties which had been broken and his interaction with the passengers he meets during his work. Konishi plays Furui Shiho who is Toshikazu's current girlfriend while Aoi Wakana and Nanase play his daughter Ayana and son Reiji respectively. Nagatsuka Kyozo will be playing Miyuki's father Yamabe Keizo.

In order to prepare for the filming, Harada revealed that he went to get a bus driving license and managed to get it thanks to the help of the staff at the driving centre. Harada also thanked the driver who was with him during the training and credited him for his quick improvement because he thrived thanks to the latter's praise. As Yamamoto played his ex-wife and Konishi played his girlfriend, Harada was assigned to sit between the two actresses so he joked that this must be how Ishida Junichi feels in a reference to his multiple relationships to date.

Yamamoto who fractured the back of her left foot when she fell down at home last month, appeared in a wheelchair during the event. She revealed that she was unsure whether a woman would fall in love again with her ex-husband as depicted in the movie but thanks to Harada being such a mature and gentle man, she could imagine how it felt for her character and act accordingly. Konishi also echoed her view and said that she could act naturally to show the feel of the long-term relationship between her character and his.