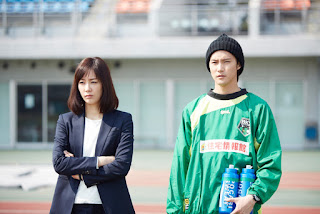 Shiraishi Shunya and Mizukawa Asami will be starring in the new movie "Hopeiro no Yuuutsu" (The melancholy of the roupeiro) which is based on the same-titled novel by Inoue Naoto and will be written and directed by Kajiya Akihito. The Portuguese word roupeiro refers to someone who is in charge of a sporting team's uniforms and equipment. The movie which was shot in Sagamihara, Kanagawa Prefecture, will be released first at MOVIX Hashimoto in Sagamihara from 6 January 2018 before it is shown nationwide from 13 January 2018.

Shiraishi summarised the movie as a story about what goes on behind the scenes of a weak soccer club. Although it may seem like a special world unknown to many, Shiraishi said that the problems depicted in the story are ones which anyone who is working will come across. As such, he hoped that the movie will be a warm encouragement to those facing the same issues.

Source: Natalie
Posted by Chiaki at 12:37 AM