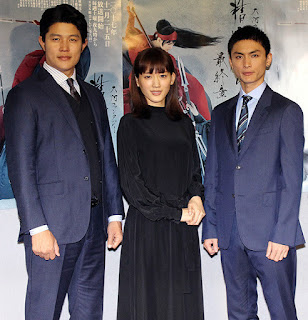 The screening event of NHK drama "Seirei no Moribito Saishusho" was held at the TV station's HQ in Shibuya, Tokyo, which was attended by cast members Ayase Haruka, Koura Kengo and Suzuki Ryohei. The drama will begin its run from 25 November in the Saturdays 9pm timeslot. Filming of the drama was done over three years and completed in spring 2017.


For Ayase, as she started filming this drama when she turned 30, she regarded this as a huge wall and challenge which she had to overcome. Through the filming, she also discovered new sides to herself which made her become stronger and more mature. As for the numerous action scenes she had to do, Ayase remarked that it was tough to the extent that she didn't know if she could handle it after the first day of filming. However, once she overcame it, she started to get the idea of what it meant to fight for one's survival with their lives and it became easier for her to portray her character. In fact, she said that she did not have enough of the fighting scenes in this last installment and was asking if that was all she needed to do.

Koura who plays the last enemy of Ayase's character, aid that he was feeling burdened about playing this important role in this star-studded cast but he was able to get through this by not worrying too much about it and with Ayase's help. As for Suzuki who plays the subordinate of Koura's character, he said with regret that although he got to do a lot of action scenes like Ayase in Season 2, he didn't get to do the same in this concluding installment. However, he described his character like a middle manager who was always trying to keep his boss happy so he believed that this part would resonate with the viewers.