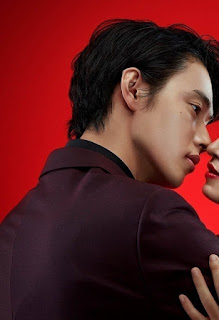 Yamazaki Kento will be starring in the new NTV Winter 2018 drama "Todome no Kiss" (The kiss which deals the final blow) which will begin its run from January 2018 in the Sundays 10.30pm timeslot. This will be Yamazaki's first leading role in a drama series.

The original story features Yamazaki as Doujima Outarou, the No.1 host in a host club who doesn't believe in love after an incident which happened to him 12 years ago. Since then, he only has eyes for money and power while manipulating women with his good looks and gentle pretense. When he tries to approach a rich man's daughter Namiki Mikoto with ulterior motives, he is stopped by a mysterious woman looking pale but with bright red lips who offers a kiss to Outarou. Unexpectedly, this causes Outarou to have breathing difficulties and he dies after experiencing convulsions. When Outarou comes to later, he realises that he has been sent back to 7 days ago and goes through the same period repeatedly due to the mysterious woman who keeps appearing in front of him. The actress who plays this mysterious woman will be announced at a later date followed by the supporting cast announcements which will be revealed every Thursday. The supporting characters include Namiki Takauji who is the elder brother of Mikoto and from a top-notch hotel group and Hasebe Hiroyuki who is the heir of a big name cruise company and in love with Mikoto.

Yamazaki commented that since he is going to do something different this time, he might as well play someone extreme like this i.e. a scumbag with twisted values. Being a fan of science-fiction stories, he was also intrigued by the unusual setting of being killed by a kiss so he hoped that this drama will become the most unusual and outstanding drama this upcoming winter.