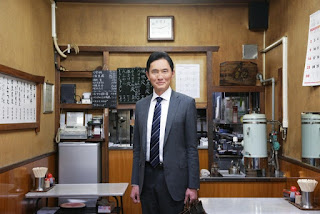 Matsushige Yutaka will be back as Inogashira Goro in the new "Kodoku no Gurume" SP due to be shown at 10pm on 31 December. The SP titled "Oomisoka SP ~ Setouchi Shucchou Hen ~" (New Year's Eve SP ~ Business trip to Setouchi) will feature various delicacies which Goro gets to eat during his 2-day-trip to the Setouchi region. In addition, at the beginning of the SP, there will be a live broadcast where Matsushige and the original manga's author Kusumi Masayuki will engage in a chat segment for the first time in the drama's history. In recent years, TV Tokyo usually shows sports or news or music programmes on New Year's Eve so it is rare for a drama to be shown on the last day of the year. In response to this, Matsushige commented jokingly that TV Tokyo was probably planning to throw in the towel when he heard about the broadcast timeslot for the SP since people usually watch NHK's "Kouhaku" or NTV's "Gakitsukai" during this time. It will also be truly gourmet terror for the viewers to watch such a mouthwatering programme at this time when people tend to get hungry but there are no restaurants open.