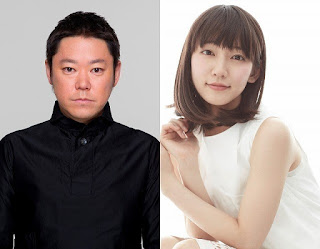 Abe Sadao and Yoshioka Riho will be starring in the new movie "Onryou wo agero tako! Nani utattennoka zenzen wakannendayo!!" (Turn up the volume Idiot! I don't understand at all what you are singing!!) which will be directed by Miki Satoshi and will be shown in cinemas next year. Filming will begin in November 2017.


The original story features Abe as the lead character Shin, a popular rock star who boasts of a 4-octave pitch extent and a voice which can touch everyone. He has everything in life including money, women and fame but also has an unspeakable secret. In order to maintain his golden voice, Shin has been using the taboo method of vocal cords doping but the side-effects are already starting to show and he knows that he is reaching his limit. While fearing the day when he can't sing anymore, Shin meets a street musician Azuha Fuuka (Yoshioka) who sings so softly that nobody can hear clearly what she's singing.

In order to project the superstar image of Shin in this movie, Abe was asked to dress like the musician Marilyn Manson at the request of the production staff. With regard to working with the director for the first time, Abe said that he is very excited about this rock comedy and wonders how it will be filmed. As for working with Yoshioka, Abe said that he has never met Yoshioka before and is eager to find out how she will play Fuuka.

Yoshioka commented that the story is full of funny and unexpected developments and she is very excited about working with Miki. However, as she has never sang on screen or even touched a guitar before, Yoshioka said that she will have to work on her character from scratch and has started to learn to play the guitar and sing as she juggles her busy schedule.