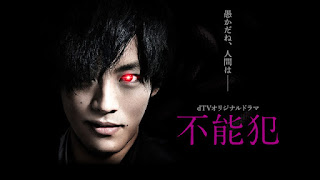 The drama version of new movie "Funouhan" starring Matsuzaka Toori will be shown via dTV from December 2017 ahead of the movie's release in cinemas from 1 February 2018. The drama which consists of 4 episodes, will feature the movie's cast members of Matsuzaka, Sawajiri Erika and Mikami Kensei as well as the drama's cast of Nagao Mariya, Nagai Masaru and Hiraoka Yuta. Each episode will be uploaded on dTV every Friday after the first OA date and the theme song of the movie and drama will be the same i.e.  "Orokamonotachi" (The Foolish) by GLIM SPANKY.


The film which is based on the ongoing same-titled manga by Miyatsuki Arata and Kanzaki Yuuya, features Matsuzaka as Usobuki Tadashi who is a mysterious man with red eyes, wears black suits with a wine-red shirt and possesses a special power which will drive people to their death through methods such as curses and brainwashing. However, it is impossible for his crimes to be proven in court thus Usobuki cannot be taken to justice for the killings he did on behalf of his clients. Sawajiri plays the role of Tada Tomoko who is a police detective and the only person who cannot be controlled by Usobuki. She is the number one beauty in the police station who hates lies and beating around the bush. Although she may speak harshly, she's actually very caring towards her subordinates and even the criminals. In the original manga, this character is actually a man but it was decided to change this to a female instead so as to contrast against the evil and bewitching Usobuki.

In the drama version, Nagao will play a OL who tries to hide her shocking past while trying to conceal her tracks, Nagai plays a salaryman who is on tenterhooks after winning the lottery while Hiraoka plays a teacher who seeks out teenage girls on online matchmaking sites. The three of them will be the targets of Usobuki who will try to kill them on the behalf of his clients. Other co-stars include Suzunosuke, Morioka Yutaka, MEGUMI, Izawa Yuki, Hagiwara Minori, Ito Yumi and Sato Hitomi.

So glad they used Erika to replace the original detective against Usobuki I mean he was forgettable tbh but Erika in the trailer was soo charismatic, can't wait to see how these two go against each other!