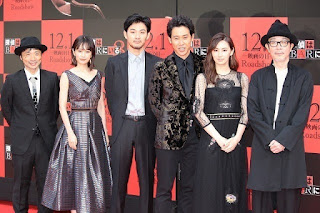 The Japan premiere event of new movie "Tantei wa BAR ni iru 3" was held at Shinagawa Prince Hotel's Ichouzaka on 24 October which was attended by the director Yoshida Teruyuki and cast members Ooizumi Yo, Matsuda Ryuhei, Kitagawa Keiko, Maeda Atsuko and Lily Franky. The movie is scheduled to be shown in cinemas from 1 December.


The latest installment is the first movie of the series in 4 years based on the mystery novel series "Susukino Tantei Series" by Azuma Naomi and features Ooizumi as the detective Ore i.e. I and Ore's partner and driver Takada (Matsuda) who go around Hokkaido in winter to solve cases. Kitagawa is the third generation heroine following Koyuki and Ono Machiko in the earlier installments and plays Mari the owner of a model agency. Ore and Takada take on a case to investigate the disappearance of a female university student (Maeda) from a prostitution group and come face to face with a big underworld figure Hojo (Lily) which gets them embroiled into an unexpected incident.

Ooizumi appeared at the red carpet to greet about 150 fans who had gathered and spoke in a way like how politicians greet the public during street speeches. He poked fun at himself for bringing in bad weather even though that day had just seen the departure of a typhoon and was having clear skies before he reached the venue. Nonetheless, he expressed his joy at being able to hold a premiere event for this movie despite the weather which didn't seem to be in his favour. As the movie was shot on location in Sapporo during the winter, a snow machine was utilised to create the same snowy weather in Tokyo despite it being just October. Initially, the fans thought that the snow was just paper confetti but were surprised to find that it was real snow falling from above.

During the event, the cast made fun of Ooizumi in various ways. Lily teased Ooizumi for wearing a suit which was made by his grandmother overnight which made the latter retort jokingly that he will sue Lily. When Maeda revealed that Ooizumi treated her to soup curry when they were filming in Hokkaido and that it was the first time she had ever eaten that, Ooizumi "complained" that he did treat her to other expensive food than just soup curry. Lily then followed up by saying that Ooizumi had become the detective who slept at the bar (Tantei wa BAR de neru) as he fell asleep in just 30 minutes after drinking which led Ooizumi to clarify that he can't hold his liquor well. When asked about the selling point of Part 3, Ooizumi poked fun at the recent trend phrase of "crossing the line" used by celebrities and politicians caught for extramarital affairs by saying that his character and the heroine had "crossed the line" but it depends on the viewers to find out and judge if that had really happened.

Matsuda commented that he never expected the series to be able to reach Part 3 and thanked everyone for his support. He thought that he might quit from the series after Part 3 but became interested in the likelihood of a Part 4 so he pledged to continue working hard in order to make this materialise in future. When he was asked other questions by the MC and pondering over what to answer, Ooizumi came to his rescue at times and helped him deflect the questions.