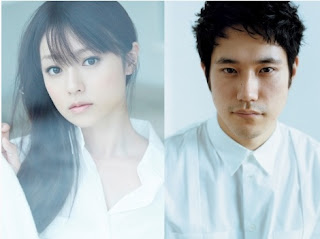 Fukada Kyoko and Matsuyama Kenichi will be playing a married couple in the new FujiTV Winter 2018 drama "Tonari no kazoku wa aoku mieru" (The family next door looks better than ours) which will begin its run from January 2018 in the Thursdays 10pm timeslot. This is the second time that the two of them are playing a married couple since the 2012 Taiga drama "Taira no Kiyomori".


In this original story, Fukada plays the 35-year-old lead character Igarashi Nana  who works as a scuba-diving instructor, is a cheerful person. In contrast, her 32-year-old Daiki (Matsuyama) who works as an employee in a mid-size toy manufacturing company, is a gentle but not very reliable. The couple finally buy a house in a cooperative housing estate where the families living there come together to give their views on various issues regarding their estate and try to reach a consensus. The move leads Daiki's mother to expect the couple to be able to make some progress in starting a family but things do not go as they wish. In addition, even though they may not want to get close to their neighbours, the couple has to maintain friendly relations with them who have their own set of problems reflective of this era such as an once-divorced husband with his wife who doesn't want kids, a housewife who is bent on projecting a perfect image to everyone but her husband has resigned from his company and a gay couple who is thinking of having kids.

Fukada commented that after reading the script, she felt that even among family members, there are various thoughts swirling in their minds which may not be communicated to one another. As such, she is looking forward to showing this issue through the drama. On the other hand, Matsuyama said that he is happy to play Fukada's husband again in this drama and looks forward to portraying the problems faced by married couples in a realistic manner.