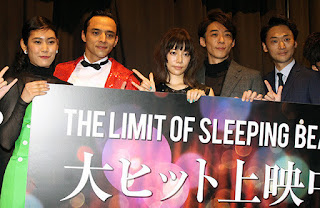 The first-day-screening event of new movie "The Limit of Sleeping Beauty" was held at Shinjuku Musashinokan on 21 October which was attended by the director Ninomiya Ken and cast members Sakurai Yuki, Takahashi Issei, Mitsushima Shinnosuke, Abe Junko and Sasaki Ippei.


The movie is a remake of Ninomiya's 2014 independent film "Nemureru bijo no genkai" which won the judges' special award at the 2015 Yuubari International Fantastic Movie Festival. Sakurai plays the lead character Oria Aki who works as a magician's assistant in a circus troupe and has no purpose in life. As she gets hynoptised during a stage performance, she finds herself wandering between reality and an imaginary world where the only pleasant memories she has are those with her boyfriend Kaito (Takahashi).

In line with the movie's theme of alternating between imagination and reality, Mitsushima whose character appears in Aki's imaginary world in the movie, appeared in a flashy costume in red and asked if Takahashi would be free to go on a date with him. In response, Takahashi joked that his schedule is filled till 3 years later and suggested that they go today. This led to Mitsushima remarking in jest that they should go somewhere to drink a glass of tapioca juice together with 2 straws. Abe also joined in to poke fun at Takahashi by saying that if there was an imaginary world, she hoped to become Takahashi so as to make the women go wild over him and appear in a feature of an.an where he had a sexy photo spread.

Sakurai said that it had been a year since they filmed this movie and she was thankful that the movie is finally ready to be watched by the audience. Likewise, Takahashi also echoed her view and said that it was an enjoyable experience to be able to work on this movie.

Email ThisBlogThis!Share to TwitterShare to FacebookShare to Pinterest
Labels: Movie News, The Limit of Sleeping Beauty