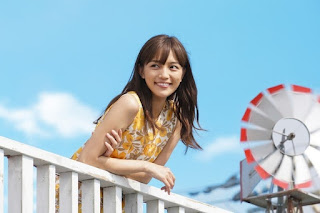 Kawaguchi Haruna will be starring in the new Amazon drama series "Shiro to Kiiro ~ Hawaii to Watashi no Pankeeki Monogatari ~" (White & Yellow ~ My Pancake Story with Hawaii ~) which will be shown via Amazon Prime Video in the spring of 2018. The drama consists of 25 episodes lasting 15 minutes each and the script is written by Okada Yoshikazu. Compared to an usual drama, Amazon has decided to make each episode of this drama shorter so that viewers can watch an episode during a short break e.g. during their commute on trains, lunch breaks or while waiting for someone.


The heartwarming drama describes the true story of how a female university student Sawano Natsumi (Kawaguchi) from Shonan comes across a pancake restaurant named Eggs n' Things in Hawaii and decides to bring this delicacy to Japan which subsequently leads to the pancake boom in Japan. Despite the difficulties and setbacks she encounters, Natsumi manages to realise her dream with the support of her family and friends. Kawaguchi commented that she is eagerly looking forward to the filming while being surrounded by the beautiful scenery in Hawaii and hopes to convey Natsumi's energy and dynamism through this drama.