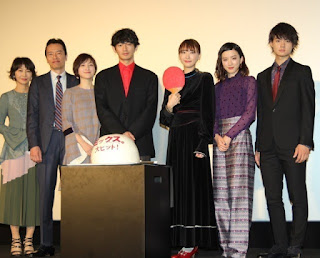 The first-day-screening event of new movie "Mix" was held at TOHO Cinemas Roppongi Hills on 21 October which was attended by the director Ishikawa Junichi and cast members Aragaki Yui, Eita, Hirosue Ryoko, Nagano Mei, Sano Hayato, Tanaka Misako and Endo Kenichi. The movie describes how the heroine (Aragaki) used to be a genius at table tennis when she was a child but suffers setbacks in love and her career as an OL. In order to resurrect the table tennis club owned by her late mother, she forms a mixed doubles team with a former boxer (Eita) to take part in the All Japan table tennis tournament and get back at her ex-boyfriend (Seto) and his girlfriend (Nagano).

Aragaki and Eita had participated in many promotional events and gave numerous interviews in a bid to promote this movie. Reflecting on the promotional run, Aragaki said that they put in so much effort to spread the word about their movie which made it possible for them to see how the audience reacted during the pre-release screening and hear first-hand how they felt about their film. As for Eita, he revealed that he was surprised by how everyone reacted so strongly to his comment about liking Aragaki during the completion screening event on 20 September as everyone seemed more concerned about this comment even though he intended this to be a tactic to draw attention to their movie. Nonetheless, he thanked the media for helping a lot with the promotion and reiterated his point that he likes his co-star which made the audience squeal with delight.

At the end of the event, there was a huge cake in the shape of a ping pong ball. When Aragaki fed Eita a bite of the cake, Eita called upon the media not to write anything extra as he was "scared" of her fans.

HELP ME, please!!! Translate for me: