New NHK morning drama "Manpuku" to be shown from autumn 2018 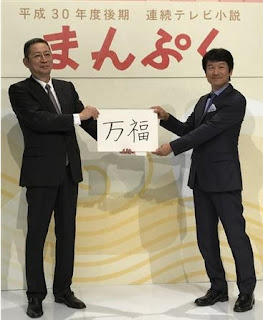 NHK announced on 14 November that it will be showing a new morning drama "Manpuku" (All health and happiness) which consists of 151 episodes and will be shown from 1 October 2018 to 30 March 2019. The story will be written by Fukuda Yasushi who is known for his works such as "HERO", "Galileo" and "Ryomaden" and this will be his attempt at writing a morning drama. The story set from the days before WWII to the period of high economic growth in Osaka will feature a heroine modelled after Ando Masako and her husband Ando Momofuku who created the instant ramen. "Manpuku" will be the 99th morning drama in the history of NHK's morning dramas and the 42nd production by NHK Osaka.


The producer Manabe Itsuki who was also present at the production press conference, described the story as one depicting the turbulent life of the heroine since she was young and only reaping the fruits of her labour much later. As such, the theme of the story is to show how those who failed can rise up again and achieve success and they hoped that it will be an inspiring tale for everyone nationwide.

Fukuda admitted that he hasn't started writing the script and is the midst of doing research on the Andos. However, although there is a lot of information on Ando Momofuku, there is very little on his wife Masako so he will have to use his imagination to create an original story with humour and comedic elements in order to avoid making this into a dark story. As for the heroine, Fukuda imagined her to be someone who is expecting to be happy after marriage but has the power to take charge of her fate even when she realises that things do not go her way. The choice of the heroine will be done through casting calls and auditions so they hope to find someone who can handle the progression of the character through the years in the story.