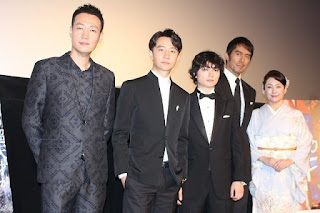 The screening event of new movie "KU-KAI" during the 30th Tokyo International Film Festival was held at TOHO Cinemas Roppongi Hills on 25 October which was attended by cast members Sometani Shota, Huang Xuan, Xin Baiqing, Matsuzaka Keiko and Abe Hiroshi. The movie will be shown in cinemas from 24 February 2018.


The movie which is directed by Chen Kaige, features Sometani as the younger version of monk Kukai who was sent from Japan to the Tang Dynasty as an envoy. The story is based on the novel "Shamon Kukai Tou no Kuni nite Oni to udagesu" by Yumemakura Baku and talks about how the young Kukai and poet Bai Letian (Huang) try to solve a huge mystery affecting the Tang Dynasty's capital at Chang-an.

Sometani commented that he was very proud to be able to present this movie to everyone at the festival while his co-star Huang called upon everyone to come and support the movie next year and that it was a fantastic experience for him to be working with great Japanese actors through this film. When asked how the director was like during the filming, Sometani said that Chen was daring yet detailed at the same time and wanted to discover what true beauty is through this movie. As such, when he heard this from Chen, he was really impressed and put in his all during the filming which he described as something which he had never experienced before. As for Abe who plays the Japanese scholar Abe no Nakamaro, he described Chen as someone who doesn't compromise and poured in a lot of passion and time into every scene. There were as many as 500 extras on the set every day but the director managed to lead everyone in such a charismatic manner so Abe expressed his respect for Chen for being such a wonderful director.