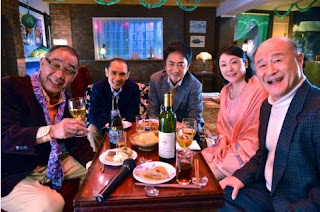 Ichimura Masachika will be starring in the new TV Asahi drama SP "Saigo no Dousoukai" (The Last Class Reunion) which will be shown at 10am on 26 November. The drama which is written by Okada Yoshikazu, also features Denden, Kataoka Tsurutaro, Matsuzaka Keiko and Kadono Takuzo in its cast and is one of the participating works in the 2017 National Arts Festival organised by the Agency for Cultural Affairs.


The comedic drama SP begins with a class reunion involving 5 ex-primary school classmates who have reached 60 years old. Through this occasion, it leads them to rethink that their lives are far from over and that there is still hope for them even at this stage of their lives. Ichimura plays Takatsuki Isao who used to be the leader in the group during their primary school days but has become an ordinary man who is taken for granted and ignored by everyone around him. His former classmates include Sakata Norio (Kakuno) who organised the class reunion, Tamura Minoru (Denden) who is the moodmaker in the group, Yonekura Shoichi (Kataoka) who didn't make much of an impression on the others when he was a child and Hanaoka Machiko (Matsuzaka), the only female in the group.

During the reunion, none of them can claim to have had a wonderful life since graduating from primary school and have their respective problems now such as being on the run due to a robbery case, being diagnosed with a terminal illness, being abused by her daughter-in-law after the death of her husband and having issues with his only daughter. On the following day after the reunion, Tamura who had been having heart problems, suddenly passes away. This leads his ex-classmates to come up with the crazy idea of sending Tamura's body to the venue of his granddaughter's piano presentation event because Tamura had yearned to see his granddaughter but couldn't due to his conflict with his daughter. The group encounters many unexpected happenings during the journey which reminds them of the excitement they experienced as kids and find new hope in their bleak lives.

Ichimura commented that when he read the script, he was struck by how good the story is and saw meaning in doing this drama. In addition, since his co-stars are about the same age as him, it was a very enjoyable experience to be working together with them and talk about things which they had experienced over the years which they could identify with.

During the scene where the dead body was being brought out for the drive, the actors were all dressed in leather clothes. However, even though Denden was supposed to play the dead Tamura, he was moving so much until he sweated the most among the cast members and got scolded by the costume manager. In response, Denden said that despite having played dead people many times to date, there were so many action scenes he had to do this time which made him wonder why because he didn't get to move as much when his character was still alive.

Kakuno said that when he first read the script, he cried two to three times but when he was on the set, he was laughing all the time. As for Matsuzaka, although the story is tinged with sadness due to the death of one of their friends, this drama is also filled with an uncharacteristic positive vibe which shows the depth of the cast's acting skills and the filming was very gratifying for her.