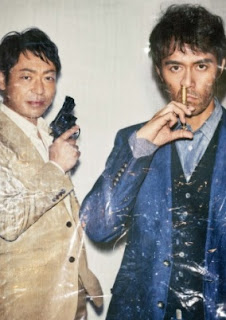 Abe Hiroshi and Kagawa Teruyuki will be back in the new NHK drama SP "Sniffer SP" which is due to be shown at 10pm on 21 March 2018 as the continuation to the original series shown in autumn 2016. The original drama was a remake of the 2013 hit Ukranian drama series and features Abe as the lead character Hanaoka Shinichiro who has a strong sense of smell and nicknamed as "Sniffer". He makes use of his ability to solve difficult cases by being able to tell a person's age, gender, lifestyle type and what he or she had eaten with his nose. Kagawa plays his buddy Komukai Tatsuro who is somewhat like his guardian angel and yet at odds with him while Igawa plays the role of Suenaga Yuki, a ENT doctor who is intrigued by Hanaoka's ability.
In the new SP, Hanaoka continues using his sense of smell to solve cases. He encounters a serial murder case where the corpses are covered with flower petals and picks up a mysterious smell which is supposedly used in the cultivation of bacteria. Meanwhile, Tatsuro has been removed from the investigation team thus paving the way for a mysterious profiler Shichijo Kana (Haru) who had returned from the FBI to join forces with Hanaoka. Nonetheless, Tatsuro continues the investigation of the case on his own but ends up being kidnapped by a mysterious man. Hanaoka tries to find out what the smell he picked up was and goes to his former colleague Iwabuchi Yukio (Matsuo Suzuki) for help and realises that the bacteria could be used as a bioterror weapon. Co-stars in this SP also include Nishimura Masahiko, Igawa Haruka, Itaya Yuka, Nomaguchi Tooru, Takahashi Maryjun, Baba Tooru, Takemori Sento, Mizutani Kaho and Yoshiyuki Kazuko.

Filming will be done from October to November in Tokyo and other areas within the Kanto region.