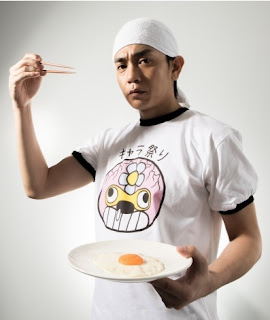 Aoyagi Sho and Narumi Riko will be starring in the new MBS & TBS Autumn 2017 drama "Medamayaki no kiimi itsu tsubusu?" (When do you break the yolk of your sunny-side-up?) which begins its run respectively from 5th November at 12.50am on Sundays and 7th November at 1.28am on Tuesdays. The drama which consists of 4 episodes, will have its 5th to 7th episodes streamed for free via GYAO! after it ends its run onTV.


The story which is based on the same-titled manga by Oohinata Gou, features Aoyagi as the lead character Tamiyamaru Jiro (nickname Jiro-chan) and Narumi as his girlfriend Mifuyu who is a female comedian. Due to Jiro-chan's obsessive eating habits like when to break the yolk of a sunny-side-up and whether to remove the meat from a yakitori stick, he ends up clashing with Mifuyu often due to their differences in this area and they slowly drift apart. Through the advice of his boss Kondo (Sato Jiro) who helps him to see things differently at work and in his relationships, Jiro-chan and Mifuyu gradually understand each other better and try to bridge their differences.

Aoyagi said that he's not the type to laugh on his own but he was doing exactly that when he was reading the original manga. As the drama does not focus merely on eating, he hopes to show the passionate and direct sides of Jiro which gets on the nerves of people around him. As for Narumi, she said that it was difficult for her to play a comedian but she hoped to enjoy the filming as much as possible with Aoyagi who she described as a perfect fit for Jiro-chan.