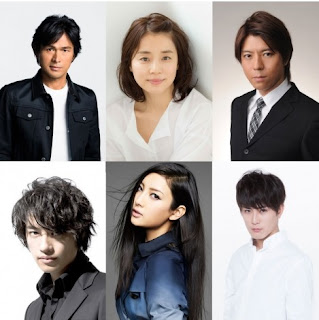 The supporting cast line-up of TV Asahi Winter 2018 drama "BG ~ Shinpen Keigonin ~" had been announced.  The drama which begin its run from January in the Thursdays 9pm timeslot, features Kimura Takuya as the lead character Shimazaki Akira who starts work as a bodyguard in a private security company and doesn't hold any guns or weapons in the course of his work. Shimazaki used to be a capable bodyguard but quit and became a security guard at a construction site. While hiding his past, Shimazaki becomes a bodyguard again and goes through his daily work with other newbie bodyguards. As such, he will have to depend on his skills and quick thinking to assess the situation while ensuring the safety of his clients and not going overboard beyond the line of self-defense. In addition, he has to obey the orders of his clients and protect anyone who becomes his client regardless of their identities. At home, he is a single father to a junior high school boy and has communication issues with his son.


Saito Takumi, Nanao and Mamiya Shotaro will play Shimazaki's colleagues who are also personal bodyguards while Kamikawa Takaya will play Murata Goro, the section chief of the bodyguards team. Eguchi Yosuke will play Ochiai Yoshiaki who is in the security police department of the Metropolitan Police Department and at loggerheads with the bodyguards team while Ishida Yuriko will play Tachihara Aiko, the Minister of Health, Labour and Welfare, who is to be protected by the bodyguards team. The details about the characters are as follows:

Takanashi Masaya - Saito Takumi
Former Self Defense Forces member who has joined the team as a newbie bodyguard. Having performed better than his peers, he looks down on them at times. His character is straightforward and passionate but he is also prone to jumping to conclusions too quickly and very inflexible.

Suganuma Mayu - Nanao
Used to be a promising judo athlete and has joined the team as a newbie bodyguard. Has great reflexes and views her job as a means to making money so is especially drawn to dangerous jobs which come with a premium.

Sawaguchi Seitarou - Mamiya Shotaro
Failed to get a permanent job anywhere and had no choice but to get a job at the security company as a bodyguard. He doesn't think much about things and is somewhat frivolous.

Murata Gorou - Kamikawa Takaya
The section chief of the bodyguards team and has to lead his members who have very different characters. Very flexible and calm and knows his team members well.

Tachihara Aiko - Ishida Yuriko
Minister of Health, Labour and Welfare who used to be a popular news announcer and is known for being an intellectual beauty. Became a House of Representatives councillor 8 years ago after riding on the wave of popularity especially from men. Ambitious and eager to get ahead without caring about how she does it.

Ochiai Yoshiaki - Eguchi Yosuke
Security police officer from the MPD who rose from a neighbourhood police post with his strong capability, knowledge and ability to remain calm. Especially good at shooting with a gun. Doesn't think too well of the private bodyguards.

Nanao again? zzzzzzz. Not keen on the cast as I don't get the appeal of Saito Takumi. Also, is that Ishida Yuriko rather than Aiko?

Thanks for pointing out the typo, I've corrected it.

Well, the supporting cast is at best "supporting" when it's a drama starring KimuTaku. I don't have anything against him but it makes me quite mad to see leading men/women material to be reduced to no more than accessories, be it whether I like them or not in the first place. Just look at what happened to Asano Tadanobu and Matsuyama Kenichi last time in "A LIFE"!

Yes, I was pretty pissed about A LIFE, what an affront to Asano and MatsuKen. This time, Kimutaku has the likes of Eguchi and Kamikawa supporting him when they've done dramas/roles he could only dream of... seriously, why does this happen every time? I just don't get it. Grrrrr. Does he not... feel embarrassed??