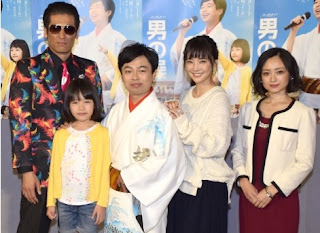 The screening event and press conference of new NHK drama "Otoko no Misao" was held at its Tokyo HQ on 6 November which was attended by cast members Hamano Kenta, Kurashina Kana, Awano Sari, Sato Ryuta and Adachi Yumi. The drama begins its run from 12 November in the Sundays 10pm timeslot.


The story is based on the same-titled manga by Gouda Yoshiie about how a struggling enka singer and single father tries to raise his only daughter and realise their family's dream of him performing on the NHK Kouhaku show. Hamano plays the lead character Itsuki Misao while his late wife Junko will be played by Kurashina. His only daughter Aware will be played by Awano and their neighbour Manda will be played by Kawaei Rina. Adachi will play the boss of the agency which manages Misao.

Hamano will be singing the insert song "Otoko no Misao" written by Tsunku which marks his first attempt in singing an enka song. When asked about their views of Hamano's song, Kurashina said that she wasn't able to hear it live since her character Junko was supposed to be dead. However, she had watched Hamano in a stage play before the filming for this drama began and was impressed with his singing and dancing. As such, she hoped that everyone will like the song and expressed her wish to Hamano that she wants to hear him sing the song "live" in front of her soon which he agreed to readily. As for Awano, she expressed her wish to see the song being released on CD and promised to help in promoting it. Adachi and Sato also chipped in to praise Hamano for singing the song well and even revealed that the viewers will find the latter cool after they watch his singing scene at the end of episode 1.

During the event, Adachi made a blunder and accidentally called Hamano as Amano which led her to correct herself quickly. However, Sato took the opportunity to tease her which led everyone to laugh at her careless mistake.

Since his character's dream is to appear on the Kouhaku, Hamano also expressed his wish to do the same. He revealed that he wanted to go to Hawaii for the New Year holidays but will cancel his plans if he does get invited to appear on the Kouhaku and hopes to be able to do it with his co-stars and Tsunku. Hamano also said that he was wondering if he was up to becoming the lead in this drama and said that he was so happy to be working with everyone in this drama.

The song "Otoko no Misao" is expected to be released on CD in December this year.