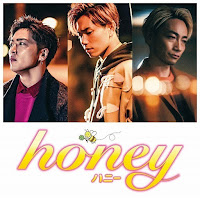 Sonar Pocket will be singing the theme song for new movie "honey" starring Hirano Sho and Taira Yuna which will be shown in cinemas from 31 March 2018. The movie is based on the same-titled manga by Meguro Amu and directed by Shintoku Koji. The story features Hirano as the lead character Onise Taiga who behaves like an delinquent but has a pure personality. One day, he is approached by Kogure Nao (Taira) who is afraid of Onise's reputation but asks to date him with marriage in mind. Onise is unable to reject her and has no choice but to accept her "proposal" which marks the beginning of a sweet and unlikely love story between them. Co-stars include Yokohama Ryusei, Mizutani Kaho, Asakawa Rina, Sano Gaku and Takahashi Yu.


The theme song titled "108 ~ Towa ~" was written specially for this movie and describes steadfast and bittersweet love accompanied by a gentle melody. The group commented that they had read the script many times and watched footage from the movie before they wrote the song. They hope that the viewers will be able to recall the bittersweet feelings they experienced in the past and express their liking for the people they love in a direct way.