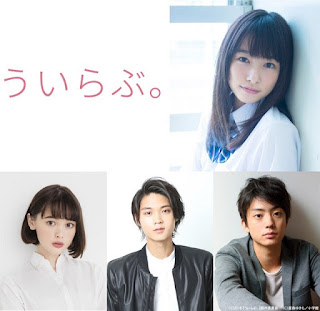 Kansai Jr member Hirano Sho and Sakurai Hinako will be starring in the new real-life adaptation movie "Uirabu Uiuishii koi no ohanashi" (We Love An innocent love story) based on the same titled manga by Hoshimori Yukimo. Co-stars include Tamashiro Tina, Isomura Hayato and Kentaro and the director will be Sato Yuichi. Filming will be done from the end of October to November and the movie will be shown in cinemas next year.


The story features four good-looking high school students living in the same apartment block who are caught in a messy web of love. Izumi Rin (Hirano) and Haruna Yuu (Sakurai) are actually in love with each other but they are too shy to confess their feelings. Rin is very much in love with Yuu but treats her coldly and speaks to her harshly in order to conceal his true feelings. Sakashita Koyomi (Tamashiro) and Fuji Keita (Isomura) who are close friends with the two, can see what is happening and feel worried for them. However, the appearance of Saiki Kazuma (Kentaro) who believes in speaking his mind, causes ripples in the relationships and friendships between the four of them.

Hirano commented that he was aware that the gap between Rin's behaviour and his true feelings was what made him appealing to the female fans so he would try his best to show this in the movie. As for the relationship between Rin and Yuu, he said that the audience would be eager to give them a much-needed push to get them to be frank with each other so the cast will be doing their best to get the audience engaged in the story emotionally.

Sakurai said that she hoped to show the innocent love between Yuu and Rin in the movie. As this is the first time she is working with Hirano, they haven't had the opportunity to talk much yet but she hoped that they will be able to work hard together to make this movie a success.