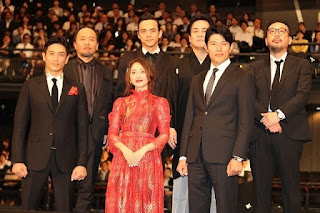 The Japan premiere event of new movie "Shinobi no Kuni" was held at Tokyo Dome City Hall on 31 May which was attended by the director Nakamura Yoshihiro and cast members Ohno Satoshi, Ishihara Satomi, Suzuki Ryohei, Chinen Yuri, Makita Sports, Mitsushima Shinnosuke, Tachikawa Danshun and Iseya Yuusuke. The movie will be shown in cinemas from 1 July.

In this movie based on the novel by Wada Ryu who is the scriptwriter, Ohno plays the role of the No.1 ninja in Iga during the Warring States era named Mumon who seems to have something missing in him that makes him appear less perfect as he should be. He appears lazy and is disinterested in the battle between the samurai led by Oda Nobunaga's second son Nobukatsu and his Iga clan. To make things worse, his wife (Ishihara) constantly nags him for not earning enough money. However, when the time comes for the battle modeled against the Tensho Iga no Ran in 1578 and 1581, Mumon is drawn into it against his own will.

At the beginning of the event, Ohno appeared from the bottom of the stage by jumping up while surrounded by smoke so as to show off a ninja's acrobatic skills. The 1500-strong audience cheered upon seeing this which Ohno said that he was embarrassed because he usually does this at Arashi concerts with his fellow group mates so he would have wanted his co-stars to join him in doing this. In response, his junior from the same agency Chinen praised Ohno for looking very cool as he did the hop-up.

When asked to describe his character, Ohno revealed that the director told him that he could be himself and didn't need to think about how to act as Mumon. Iseya joined in to tease Ohno for not playing a ninja but was just showing his true self on screen. With regard to this, Ohno said that there were some similarities between him and Mumon such as their hunched backs and laid-back laziness. Co-star Makita also said that Ohno was assimilating so well on the set that he could pass off as an extra and they wouldn't be able to identify him among the extras. In response, Ohno said that there were times when the extras thought that they were talking to one another and failed to realise that Ohno had blended into the group without them noticing.

When the host was asking Ishihara about how it was to act with Ohno for the first time, he heard the question wrongly and started butting in to answer the question which led everyone to laugh. Even so, he continued speaking and praised Ishihara for having very sharp eyes like the fierce wife she plays in the movie. Ishihara then commented that Ohno is the type who doesn't seem to be making an effort on the surface but has put in a lot of effort when nobody is looking. Even with such a tight filming schedule, she was impressed by how he could remember his lines perfectly.