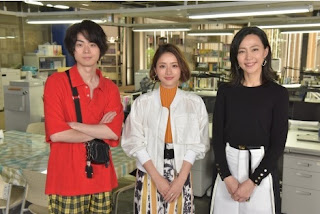 Although Etsuko is getting along fine with novelist Yukito (Suda), things at work change with the arrival of a new chief editor Nikaidou Rin (Kimura) who doesn't hesistate to fire veteran staff who had been with the magazine since its establishment. Etsuko is unable to accept Nikaidou's way of doing things and clashes with her which leads to her being chased out of the editorial department. Meanwhile, the appearance of Yukito's new editor-in-charge Tachibana Ren (Sano) causes trouble in Etsuko's relationship.

Upon hearing that a sequel SP was to be made, Ishihara commented that she was very happy and that viewers who felt that the drama's ending was not clear enough will have their doubts cleared by the end of this SP. As for Suda, he expressed his joy at being able to meet the original cast members again and viewers should find it interesting to see how the characters have developed since the end of the drama.

Yay! I was surprised by how much I enjoyed this drama. I hope Aoki Munetaka returns for the SP, but given that there are new editor characters I'm not confident.

Hi Hayley, they only named Ishihara Satomi, Suda Masaki, Honda Tsubasa and Kishitani Goro in the lineup for the original cast but there may be further announcements for others to join in. However, like what you said, the story is going to be set in the editorial department of the fashion magazine rather than the proofreading department so I doubt that everyone will return in the SP.