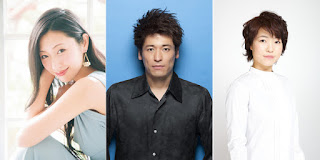 The supporting cast line-up of NTV Summer 2017 drama "Uchi no otto wa shigoto ga dekinai" starring Nishikido Ryo and Matsuoka Mayu has been announced. The drama which begins its run from July in the Saturdays 10pm timeslot, features Nishikido as the lead character Kobayashi Tsukasa who appears to be the perfect husband with good looks, stellar qualifications and a high income to his young wife Sayaka (Matsuoka). However, little does she know that Tsukasa is regarded as a burden at his workplace because of his poor work ability. Tsukasa tries his best to hide this fact from Sayaka who idolises him but things reach a stage where he wants to quit because he keeps making mistakes at work and is even bullied by his juniors at the company. Before he can do that, Sayaka discovers that she is pregnant which makes it impossible for Tsukasa to quit as he is the sole breadwinner. At the same time, Sayaka finds out about her husband's situation at work and she tries to help him overcome the challenge with her support.

Sato Ryuta plays the role of Tsuchikata Shunji who is a team leader in the same event production department as Tsukasa and highly regarded for his work ability while Dan Mitsu plays Kurokawa Akira, a career woman who is Tsukasa's boss and hates to lose to men. Tsukasa's junior at work Tadokoro Yousuke will be played by Hey! Say! JUMP's Yabu Kouta while Eguchi Noriko will play Kobayashi Midori who is Tsukasa's elder sister and Imoto Ayako will play Machida Akari, a fellow mother-to-be who is Sayaka's friend.