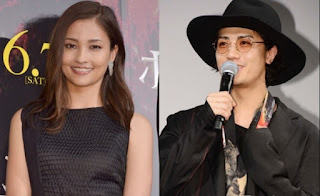 Akanishi Jin and Kuroki Meisa welcomed the arrival of their second child i.e. a baby boy as announced by her agency on 7 June. In the statement signed by the couple, Kuroki revealed that she had given birth to her second child recently and they will work hard in building a bright and happy family and their careers. Kuroki's agency said that the timing when she will return to work depends on her health condition.

Akanishi and Kuroki got married in February 2012 and their first daughter was born in September the same year. Kuroki appeared in "Doctor X ~ Gekai Daimon Michiko" in November last year while she was pregnant with her son.