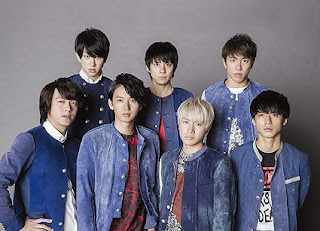 Kanjani 8 will be singing the theme song for NTV Summer 2017 drama "Uchi no otto wa shigoto ga dekinai" which begins its run from July in the Saturdays 10pm timeslot. The drama features Nishikido Ryo as the lead character Kobayashi Tsukasa who appears to be the perfect husband with good looks, stellar qualifications and a high income to his young wife Sayaka (Matsuoka Mayu). However, little does she know that Tsukasa is regarded as a burden at his workplace because of his poor work ability. Tsukasa tries his best to hide this fact from Sayaka who idolises him but things reach a stage when he wants to quit because he keeps making mistakes at work and is even bullied by his juniors at the company. Before he can do that, Sayaka discovers that she is pregnant which makes it impossible for Tsukasa to quit as he is the sole breadwinner. At the same time, Sayaka finds out about her husband's situation at work and she tries to help him overcome the challenge with her support.

The theme song titled "Kiseki no Hito" (The Miraculous Person) is a love song written by Sada Masashi who was approached by Kanjani 8 members personally. After Sada met up with Nishikido for a meal to discuss the results of a survey he had asked Nishikido to conduct among the Kanjani 8 members, he came up with the song which he hopes that the group will enjoy singing together with their fans. Nishikido commented that the song is something which is especially suitable for them to sing at this age (all of them are in their 30s now) especially since it contains their views and preferences towards love which are nicely summed up so he hopes that everyone will like this new type of music from the group.