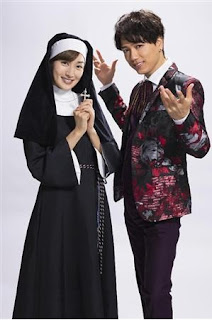 Yamazaki Ikusaburo will be starring in the new TV Asahi Summer 2017 drama "Aino Kekkon Soudanjo" (Aino's matchmaking agency) which will begin its run from July in the Fridays 11.15pm timeslot. This will be his first leading role in a drama and he will be joined by Takanashi Rin who plays the heroine.

The drama which is based on the same-titled manga by Katou Yagi and Yagi Jun which was serialised between 2010 and 2016, is set in a legendary matchmaking agency where you have to pay 2 million yen to become a member but will be guaranteed a 100% success rate in finding your ideal marriage partner. Yamazaki plays the role of the agency's manager Aino Shingo who is cold, pretentious and speaks harshly to his clients at times. Being a former assistant professor specialising in ethology, Aino is very well-versed in the behaviour of animals and insects and has a hobby of collecting such figures. He will stop at nothing to ensure that his clients find their perfect match by using his knowledge in his counselling sessions. On the other hand, Takanashi plays his assistant named Sister Elisabeth who wears a nun's outfit and has the tendency of falling in love with handsome clients. She is constantly mocked by Aino for having the brains of an insect but she always manages to help him cover up for his blunders at work.

With regard to taking on his first leading role, Yamazaki commented that he does feel the pressure but he will try his best to play Aino by challenging himself and putting in his best. When asked about what he feels would be a condition for him when seeking a marriage partner, Yamazaki who is married to former Morning Musume member Abe Natsumi and has a 10-month-old son, commented that the ideal marriage partner should be someone who you feel like you are willing to do things for. As for Takanashi, she joked about how her character is so unlike a nun with no "sister-like qualities" but she is eager to try this out as a challenge in her acting career.