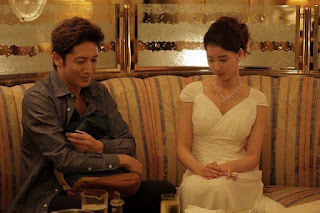 Araki Yuko will be playing the heroine in the new movie "Aku to kamen no ruuru" starring Tamaki Hiroshi which is based on the novel by Akutagawa Award-winning writer Nakamura Fuminori. The movie will be directed by Nakamura Teppei and is scheduled to be shown in cinemas next year.

Tamaki plays the lead character Kuki Fumihiro who was born into a rich family. The story begins at the time when Fumihiro was only 10 years old and came to know about the secret behind his birth and upbringing. His birth father who was the head of the household told him how he had raised his son with the aim of turning the latter into a personification of evil and "promised" to show him hell on his 14th birthday. However, one year before that, he was made to see hell first hand when Kaori, his father's adopted daughter and whom he liked, was raped in front of him. In order to protect his beloved, Fumihiro killed his father which meant that he was one step closer to the evil which his father wanted him to become. He then disappeared from Kaori's side and took on a new identity as Shintani Koichi who protects Kaori from the shadows over more than ten years. While doing so, he comes into contact again with the evil in the Kuki family. Araki will be playing Kaori in the movie and act as a hostess for the first time in her acting career.

Araki commented that she is very happy to be able to act in this movie since she is a fan of the novel but she also feels the pressure. As Kaori is the symbol of hope for the lead character Fumihiro, she hopes to be able to show the pure and kind-hearted sides of Kaori through her acting. She also emphasized that the movie showed how people can be very strong if they have someone who they love and treasure so she hopes that the audience will be able to appreciate this through watching the film.

Email ThisBlogThis!Share to TwitterShare to FacebookShare to Pinterest
Labels: Aku to kamen no ruuru, Movie News