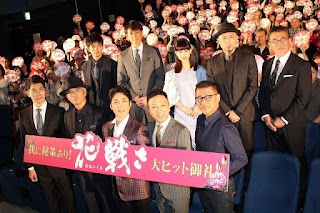 The film is based on the same-titled novel by Onitsuka Tadashi which was inspired by the legendary ikebana work "Osunamono" created by ikebana artist Ikenobo Senko in 1594 that was placed in the residence of Maeda Toshiie for the purpose of displaying to Toyotomi Hideyoshi. The story talks about the little-known story of the friendship between Senko and Sen no Rikyu, a master of the tea ceremony and how Senko who was regarded as the leader of a group of Buddhist monks in Kyoto named Ikebono then, chose to take revenge against Hideyoshi with flowers rather than a sword. During the 16th century where Kyoto was plunged into the chaos of war, there was a group of Buddhist monks named Ikenobo who believed that the art of flower arrangement would allow them to pray for peace and that people would have hope to continue living by looking at these creations. Just before Oda Nobunaga was about to unite the country, Senko, one of the monks in Ikenobo, was asked to create the Osunamono for Nobunaga and headed to Gifu Castle. While there, Senko meets a mysterious man. He also ended up offending Nobunaga with his creation but was saved by Nobunaga's young subordinate Kinoshita Tokichiro (later known as Toyotomi Hideyoshi). 12 years later when Nobunaga was no longer living and Hideyoshi had taken over, Senko reunited with the mysterious man he met who turns out to be Sen no Rikyu and had become Hideyoshi's tea master. The two of them became close friends who understood each other well. However, with his newfound power, Hideyoshi had beome a changed person. In his bid to practice his way of tea ceremony, Rikyu was forced to commit suicide by Hideyoshi. In addition, innocent people got killed as a result of Hideyoshi's madness. To take revenge for his buddy, Senko uses his skills in flower arrangement rather than resort to violence with a sword. Nomura will play the role of Ikenobo while Ichikawa will play his rival Hideyoshi. Sato Koichi will play Ikenobo's friend Sen no Rikyu while Nakai Kiichi plays Oda Nobunaga and Sasaki Kuranosuke plays Maeda Toshiie.

As flowers played an integral part in the story, the cast recalled how they were impressed with the staff's efforts in ensuring that the flowers remained beautiful despite the long hours of filming. Sato also recounted that there was a scene where he had to walk around the display to admire the flowers but was scolded for doing it the wrong way as the flowers should be viewed from the front instead.

When asked what they would do when they faced difficulties, Nomura said that he used to play the electric guitar at a large volume but resorts to doing person impersonations for fun. Sato said that he used to go to the zoo when he was younger while Sasaki said that he doesn't set goals for himself to avoid running into difficulties but he's actually the type to feel dejected easily such as when he loses confidence in himself due to being unable to remember lines.

Sato revealed as he plays the tea master Sen no Rikyu, he was teased by Sasaki for drinking coffee in a paper cup when he should have at least used a tea bowl. This led Sato to comment that it would have been weirder for him to use a tea bowl to drink coffee.

Towards the end of the event, Nakai revealed that there was a staff member who had been working on period movies all this while and had passed away before the movie was released. As such, he pledged on behalf of the cast and staff that they would continue to make period movies in future and hoped that the staff member could look upon them from heaven with a smile. Nakai also asked for the audience's continued support so that they could make this promise come true.

Sources: Eiga.com / Oricon
Posted by Chiaki at 1:32 AM