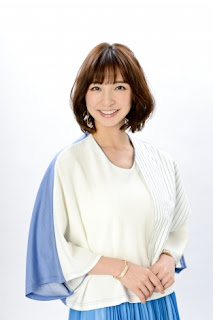 Shinoda Mariko will be appearing in the new NTV Summer 2017 drama "Nou ni sumaho ga umerareta" starring Ito Atsushi which begins its run from 6 July in the Thursdays 11.59pm timeslot. Ito plays the lead character Orimo Keita who is a 34-year-old salaryman placed on the retrenchment list by his employer which is an apparel company. He is divorced and raising his 9-year-old daughter on his own. Having the power to see the messages sent and received by other people in his brain, he makes use of this to solve various problems, help others and become a better person while being embroiled in these troublesome issues at the same time. Shinkawa Yua will play the heroine Ryuuko who teaches him how to use the smartphone in his brain. Kishitani Goro plays the role of Kurobe Jin who is the president of the company where Keita and Ryuuko work at and built the company from scratch in just one generation.

Shinoda will be playing the role of Kuriyama Satsuki who works in the general affairs department of the company where Orimo works at. She used to be a star employee but has since lost interest in her work for an unknown reason.