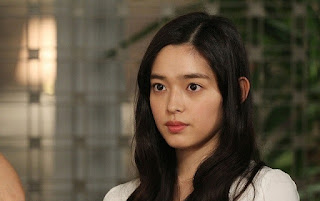 Yahagi Honoka will be appearing in the last two episodes of FujiTV Spring 2017 drama "Kizoku Tantei" i.e. Eps 10 and 11 on 19th and 26th June as the guest star. She will be playing Gudou Maki, the cousin of Gudou Hiroki (Kiriyama Ren) who is the heir of the Gudou family which deals in military equipment and is based in Singapore. Although Maki is the daughter of the family head Motofumi's second son, she is looked down on by Motofumi and Hiroki's family for being no more than an extended part of their clan. As Takatoku Aika (Takei Emi) receives a package containing JPY 500,000 and a note asking her to go to the Gudou family's bungalow Hoshimiso on 17 June, she meets Hiroki there and decides to ask about the mysterious person Masamune Koremasa who she believes is related to Kizoku Tantei (Aiba Masaki). However, Hiroki only reveals that he has heard not-so-good things about this name and advises her not to bring up the name for her own sake.

Yahagi who last worked with the drama's producer Hattori Kenichi in the 2013 drama "Itazura Na Kiss Love in TOKYO" before she went to New York for further studies, commented that she was very happy to get the offer to appear in a Getsuku drama for the first time although it was difficult to play Maki. As for working with Aiba for the first time, she said that she was really nervous but he tried to put her at ease just like a true nobleman so she could relax gradually during the filming.

I am currently watching Itazura, what a coincidence! This girl is so talented XD I didn't know she changed her name, to me she is Miki Honoka.