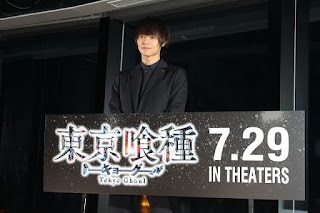 The kick-off event of new movie "Tokyo Ghoul" was held at YouTube Space Tokyo in Roppongi Hills, Tokyo, on 2 June which was attended by the lead actor Kubota Masataka, director Hagiwara Kentaro and producer Nagae Tomohiro. The event was streamed internationally via YouTube at the same time with simultaneous English interpretation. The movie is set to be shown in 23 countries so far including the US, Canada, Germany, Spain, Italy, U.K., China and South Korea. Ahead of the movie's release in Japan from 29 July, the world premiere will be held in Los Angeles on 3 July followed by the European premiere on 7 July and the Japan premiere on 10 July. To see that Japanese culture is so well-loved by overseas audiences, Kubota pledged to do his best to promote and convey the charm of this movie to as many people as possible.

The movie is based on the same-titled manga by Ishida Sui and features Kubota as the lead character Kaneki Ken while the heroine Kirishima Touka is played by Shimizu Fumika. In Tokyo where ordinary people and ghouls who look like humans but need to eat human flesh in order to survive live together. While on a date with a ghoul Rize (Aoi Yu), Kaneki meets with an accident which results in him being sent to hospital for surgery using Rize's organs. When Kaneki recovers, he discovers that he has become a half-ghoul and must cope with the changes in his body while from keeping the truth from the people he loves and his friends and evading the pursuit of CCG i.e. Commission of Counter Ghoul, the government agency which deals with crimes related to ghouls.

When asked about his thoughts when he received the offer to act in this movie, Kubota recalled that it had been a surprise especially when he heard that it was Ishida who specifically asked for him to play Kaneki. To be recognised and chosen by the original manga's author in this way, he felt that it was a huge honour for him although he was scared by the pressure as well. As for the toughest thing about the filming, Kubota said that putting on the mask was the worst for him.

It was also announced during the event that the theme song of the movie titled "BANKA" will be sung by illion which is a solo project headed by RADWIMPS' vocalist Noda Yojiro.