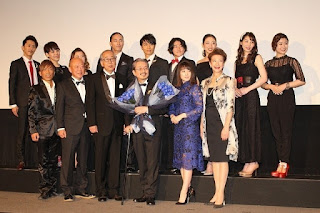 The first-day-screening event of new movie "TAP THE LAST SHOW" was held at TOHO Cinemas Hibiya Chanter on 17 June which was attended by first-time-director-cum-lead actor Mizutani Yutaka, Kitano Kii, Shimizu Natsuo, Kishibe Ittoku, Maeda Bibari, Musaka Naomasa, Ota Ayano, Sato Mizuki, dance choreography director HIDEBOH and dancers Nishikawa Taiki, HAMACHI, Sana, NON, nana and KENICHI. The movie was a project which Mizutani had been thinking of since he was in his 20s and features him as a legendary tap dancer Watari Shinjiro who had quit due to a serious injury in his leg. At the invitation of his old friend (Kishibe) who is about to close his theatre and hold a commemorative "last show", he is tasked to direct the show which allows him to regain his lost passion through the efforts of the young dancers he works with.

With regard to the movie being finally ready to be seen by everyone, Mizutani commented that he was grateful for this. As for appearing with a walking stick, Mizutani said that he wanted to appear as his character in the movie even though he could walk normally. In line with the number of years taken for the movie to be conceptualised and made, Kitano and Maeda presented a bouquet of 40 blue roses which represent realising a dream to Mizutani who said that this had been a very long dream of his so he hoped that his next dream would not take that long to realise.

Kishibe who is a close friend of Mizutani, commented that although the latter is a newbie at directing, he felt that he didn't appear to be a greenhorn and did very well for his directorial debut by doing things which other people have not done before. He also called upon Mizutani to continue directing and not stop at this movie which led Mizutani to joke if Kishibe was implying that he was a bad actor. Kishibe then clarified to say that he meant that Mizutani is both a good actor and director.